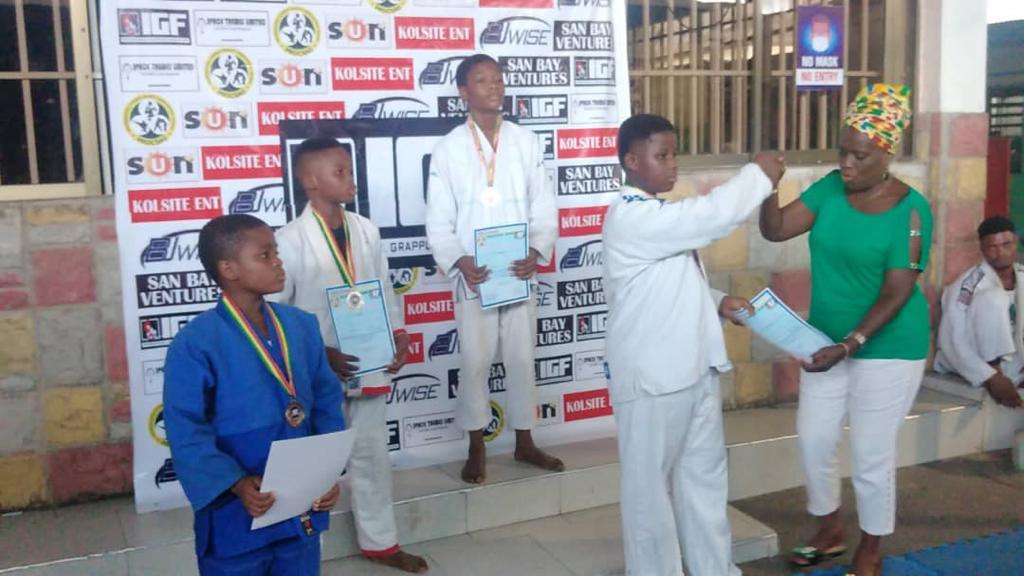 Three young brothers, all students of Hope of Glory Montessori School, Mamprobi here in Accra were the talk of town when the first ever Grappling Ghana Open championship rounded off to a much heralded success last Saturday at the Alko International School, also in Accra, and it was for good reason because the trio won medals in their respective competitions to underline their rising dominance in the combat sport.

12 year old Zoe Amoonu Bernie-Johnson, Aaron Bentwum Bernie-Johnson, 10 and six year old Leon Afrim Bernie-Johnson, all sons of Evans Bernie-Johnson, Executive Director of the Professional Combat Sports Association of Ghana (PROCSAG), and all of who attend the aforementioned Hope of Glory Montessori School have made their mark in the still burgeoning sport and Saturday at the maiden Ghana Open was no exception.

Zoe Amoonu, the elder of the trio proved his mettle in the boys under 13
division where he saw off competition from an equally strong Gregory
Edem Kojo to emerge the champion.

The JHS 1 pupil thereby grabbed the gold medal and with it a spot in Team Ghana for the soon to begin camping ahead of the world championships in Lithuania in September.

Not to be left out on glory even as he competed against older and physically stronger opponents including his elder brother, ten year old Aaron, the second of the Bernie-Johnson brothers tied for third place in the same boys under 13 category and secured himself a bronze. But it’s just the tonic for more successes for the young grappler who has also starred in Karate do where he has a green belt, just like his elder
brother, Zoe.

“I was a little disappointed not to win my category but next time I will try to be the best because I’m very determined to take the sport to the next level. The more competitions we get to compete in, the better I think I can get,” said young Aaron who is a grade 6 pupil.

“It’s a bit difficult to combine grappling with school but most often
it’s easy for me because I do the grappling and other sports at the
weekend but even then I also take advantage of any little time I get to
learn. So I think many other young people especially students can get in because it can only make you smarter and also strong,” added the 10 year old Mr. Bernie-Johnson.

The youngest of the brothers, Leon is just a grade 1 pupil but already
boasts a couple of competition victories and became the first ever Ghana Open under 9 champion following victory over Nii Annang Afah Okang, himself a pupil of Home Care School, Dansoman.

His elder brothers were also winners in the same competition, Zoe
earning the 4th position in boys under 13 whilst Aaron finished slightly
better, at third in the boys under 11 division, all behind European
grapplers.

“By God’s grace and my own hardwork I was able to win first position in this competition. I’m really proud that my hardwork paid off like this but it only means more time in the gym because I want to be the very best and beat anyone I get into a combat with, I want to remembered as one of the very best to ever compete in this sport,” Zoe Amoonu Bernie-Johnson said after his victory at the Ghana Open.

“It’s certainly not easy combining this with school but there are many advantages competing in this sport that I work hard to balance the two because it means you are highly educated and your grappling technique also ensures you know how to defend yourself even in real life situations,” young Zoe affirmed.