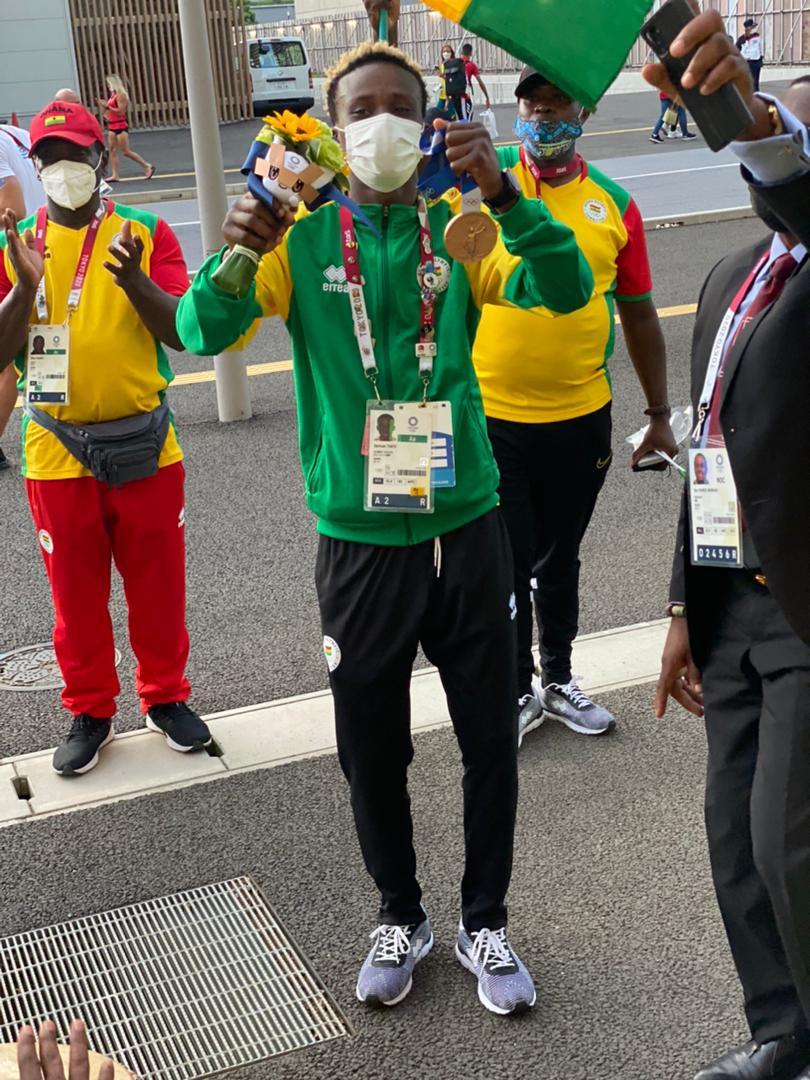 Originally written on Monday, August 2, 2021; Takyi lost to Duke Ragan in the semifinal bout and clinched bronze while Nadia Eke has announced her retirement from athletics after her elimination from medal contention at the Games.

There has been the weird and there has been the not so weird outcomes happen at these Olympic Games in Tokyo. Looking beyond the COVID 19 restrictions that have made just a handful of individuals outside the Olympic Village bubble enjoy the events in person, the Tokyo 2.0 Games have had interesting twists days before it comes to a close.

Its not weird to see Elaine Thompson-Herah win the 100 Meter Women’s race with an Olympic Record time; she run the race as the defending champion after all in the wake of her success at the Rio Games. What was a bit weird was the absence of She’Carri Richardson and Dina Asher-Smith who were the two closest challengers to her gold medal aside Shelly Ann Fraser-Pryce. Asher-Smith couldn’t make it to the final and Richardson smoked her way out of contention long before the glorious opening ceremony took place.

There is no Wayde van Niekerk in the Men’s 400 meter final and the fastest man over 100 meters this year Trayvon Bromell missed out on the final race in the event. Speaking of that final, little known Marcell Jacobs emerged as a shock winner ahead of the more celebrated Andre De Grasse to clinch gold with Yohan Blake failing to make the finals. It wasn’t weird seeing Jamaica sweep the podium in the aforementioned Women’s 100 meter race as Shericka Jackson joined Thompson-Herah and Fraser-Pryce.

On the flip side, seeing Simone Biles opt out of competing in multiple gymnastics events was cringing not because she wasn’t up to her best shape mentally to compete but because of the reason that got her to not be at her best level mentally. Feeling the weight of the world on your shoulders and still excelling is what the GOATS do and per what she has achieved so far in her career, Biles is the Gymnastics GOAT. Arguably the GOAT of Tennis, Novak Djokovic, delivered the best response to this controversy with his “pressure is privilege” statement.

Going into the semifinal, featherweight gold medal contender Samuel Takyi has the weight of an entire nation on him to get a gold medal that has eluded Ghana. Four medals with three coming in boxing since Ghana first made an appearance at the Olympics in 1952 while missing a pair of editions is a poor haul for a country that boasts so many talented individuals. Thanks to Takyi, the medal count is now five for Ghana irrespective of the outcome of his semifinal bout. Even before the Olympics end, Ghana has disappointed to deliver on its immense potential again at the biggest stage in all of sports.

At the time of writing many Ghanaians have gone through four of the seven stages of the grief cycle because of these Olympics where the shock of the country’s ill preparation of its athletes has blown up on the world stage bringing embarrassment with it. The pain and guilt of knowing we are good enough to haul in more medals beyond Takyi but failing to put the right measures in place to ensure this doesn’t happen again has been already experienced.

Watching the Olympics has become a depressing exercise since we know our athletes aren’t up to scratch because of the above factors pointed out so we are bargaining and coming up with reasons why our athletes failed and being comfortable talking up their potential and playing the “if” and “should” game. Takyi’s run in the featherweight division in Tokyo has brought the upward turn, Ghana is reconstruction and working through the issues plus there is acceptance that at least a medal has been won and there is hope for the future.

Prioritizing the scale and use of resources forms the basis of economics and since Ghana consistently struggles to finance sports well except for the Black Stars, it is imperative to prioritize the sport that has brought a ton of success to Ghana. Boxing for instance, deserves its proper due and not the scraps it feeds on from the table of men’s football. The sports checks multiple boxes to deserve multiple plates full of whole foods; boxing has a rabid fan base, talent isn’t a problem, has a rich history thanks to the exploits of the likes of Eddy Blay, Ike Quartey and Azumah Nelson and most importantly, boxing isn’t a team sport to stretch the strained finances of the sports coffers.

Had Ghana made it to the Olympics football event, it would have paraded an 18 man playing unit, a Head Coach and an Assistant Coach, a Video Coordinator, Physiotherapist, Team Manager, Kits Manager, maybe a Psychologist and definitely an official or two from the Ministry of Sports and Ghana Football Association. Ghana would have presented at least a 25 man contingent for the event and spent nothing short of half a million dollars to cover training, friendly games, travel expenses and remuneration for the contingent members.

Flipping this amount of money to boxing would allow more trainers get recruited and lead more youngsters through the nuances of the sweet science in better gyms to enhance the nation’s chances of producing more boxers who qualify to compete at the Olympics and win. Doing the basic math supports this too since a Black Meteors side can only win one medal at a single Olympics whereas a boxing contingent half the number of the football unit’s playing body (9) gives Ghana nine chances to win a medal at a single Olympics.

The worst part of this issue is the underwhelming returns football gives to Ghana with no title to show for all the massive investments pumped into it. Turning up the support for boxing should be replicated in sports disciplines Ghana has shown immense potential at previous international competitions and have a strong fanbase to rally support around like the sprint events, table tennis and weightlifting. Ghana’s track and field athletes we have seen disappoint so far were undercooked before competing at the Olympics since the American College season ended a month before the Olympics and those who have graduated out of the system don’t make enough to focus solely on training and competing in pre Olympics events.

Little wonder Nadia Eke who graduated from Columbia University couldn’t even complete a valid jump in her triple jump competition. Resourcing athletes in individual disciplines to compete in pre Olympic events beyond giving them measly sums to train costs far less than what a projected cost sum would look when its centers on a football team.

Ghana’s standards are falling badly so much so when the Olympics and World Championships came around, Ghana’s athletes making the finals in the 100 meters and 200 meters for instance was almost a given but now Ghana can’t even make it to the semifinals in such events. A move away from the usual way of doing things and adopting a radical but practical approach is the best way to get Ghana to excel.