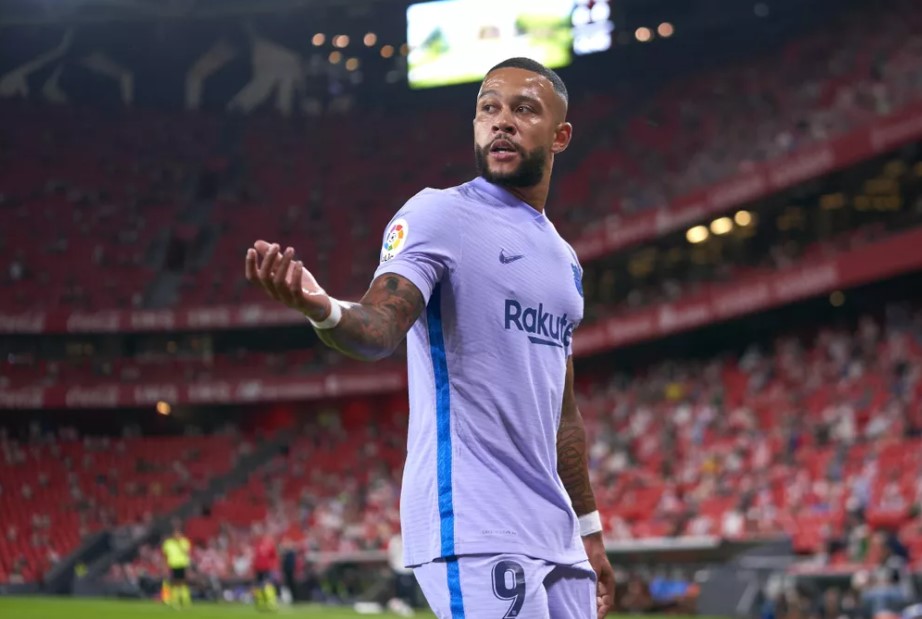 Memphis Depay scored his first goal for Barcelona, but it wasn’t enough to give the Catalans all three points as they were held to a 1-1 draw by Athletic Club.

Ronald Koeman’s side started their La Liga season with an impressive 4-2 win over Real Sociedad on opening weekend, but weren’t able to back that up against another high-intensity Basque side.

Athletic Club dominated the first half as their intensity and high pressing caused problems for Barcelona. Oihan Sancet smashed an effort off the crossbar before Inaki Williams had an opportunistic attempt saved at the near post.

Things got worse for Barca just after the half-hour mark when Gerard Pique was forced off with an injury. Koeman had revealed before the match that the veteran centre back was carrying a knock and it stopped him from continuing.

Despite the home team’s superiority, Barca appeared to have opened the scoring on the stroke of half time after Ronald Araujo’s spectacular overhead kick found the net, but the goal was disallowed for a debatable foul.

The breakthrough finally came for Athletic Club five minutes into the second half when Inigo Martinez got up highest from a corner kick to flick a glancing header into the far corner of the net.

Koeman made changes to his team, with Yusuf Demir handed a La Liga debut, and the equaliser came through Memphis Depay who unleashed a powerful strike in at the near post after being played in behind.

Frenkie de Jong struck the woodwork as the tide turned in the contest, but there was to be no winner as Barcelona, who finished with 10 men following a stoppage time red card shown to Eric Garcia, were made to settle for a point.

Replacing Lionel Messi was never going to be easy, especially in Barcelona’s current situation, but Memphis looks to have embraced the challenge.

The Dutchman is already Barca’s main man in attack. So much of their play in the final third flows through Memphis. He’s done a better job of integrating himself into Barcelona’s system in two games than Antoine Griezmann has done in two years.

Williams has a habit of finding his best form against Barcelona and the Athletic Club forward kept up this trend with another impressive performance here.

The 27-year-old was a driving force for the home side and led the high press that had the visitors pegged back inside their own half for the majority of the first half. The only thing that was missing from Williams’ game was a goal.

5’ Should be 1-0! Oh dear! What an opportunity for Barcelona to open the scoring! Memphis did well at the byline to set up Braithwaite for the strike, but he shoots over from six yards out!

12’ Off the crossbar! What a sensational strike from Sancet! He turned so quickly inside the Barcelona box and unleashed a thunderous strike, but it comes crashing off the underside of the bar!

32’ Pique off! This is bad news for Barcelona. Koeman revealed before the match that Pique had been struggling with a knock and that injury has got the better of the centre back.

50’ GOAL! Athletic Club 1-0 Barcelona: Finally, Athletic have the lead and they deserve it! Martinez got up highest from a corner kick and glanced a header into the far corner of the net! Poor marking from Barcelona and they were made to pay for it! The hosts have been the better side!

74’ Off the crossbar! So close to a STUNNING equaliser for Barcelona! De Jong attempted to lob the goalkeeper, but his effort comes back off the Athletic Club crossbar! That was genius!

75’ GOAL! Athletic Club 1-1 Barcelona: An equaliser! Roberto prodded a ball over the top for Memphis who does well to get the ball under control and unleash a strike at goal! The power beats the goalkeeper at the near post and finds the back of the net! Barca are level!

90+3’ SENT OFF! Eric Garcia is shown a straight red card for bringing down Nico Williams as he surged through on goal! He had to do it! Williams was clean through!