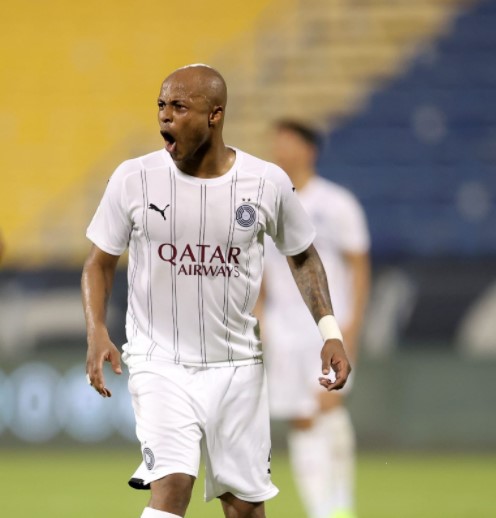 Ghana captain, Andre Ayew is a happy man and rightly so because his competitive debut for Qatari club Al Sadd ended in victory.

Manager Xavi was happy to start Ayew in the club’s first match of the season and the Black Stars captain helped to secure a 2-0 win.

The Black Stars skipper lasted the entire duration for Xavi’s side at the Thani Bin Jassim Stadium.

On 17 minutes Ayew drilled a low powerful shot that got deflected by Al Sailiya’s Magdi Siddiq, but the goalkeeper parried the ball above the crossbar with a high jump as he fell backwards.

Al Sadd opened the scoring when unmarked Boualem Khoukhi deflected a low cross from Bounedjah into the Al Sailiya net.

Ayew takes on two opponents in the game

Exactly 10 minutes later, Bounedjah found Tabata with low cross from the edge of the box.

Rodrigo Tabata anticipated the pass well and flicked the ball into the net with ease on first touch.

It is Al Sadd’s first win of the season and Ayew is expecting more because he wants to end the season having won trophies.

“First game and 3 points. Happy to play my first official game for the club. Inshallah, there will be more to come from us,” Ayew tweeted after the match.

Ayew joined the Qatari giants on a free transfer in July.

The 31-year-old had offers to stay in Europe after announcing his departure from the English Championship club Swansea.

But he felt it was time to experience football elsewhere and fortunately, Al Sadd agreed to his terms for him to sign a two-year deal.