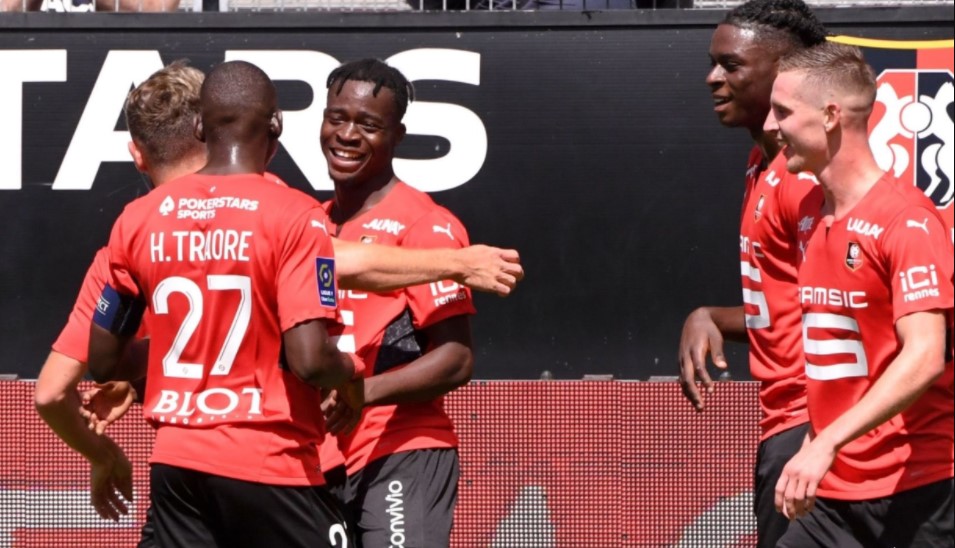 Ghana attacking midfielder, Kamaldeen Sulemana further enhanced his rapidly rising credentials by providing a crucial assist for Stade Rennes when they handed a first defeat of the 2021/22 season to a star-studded PSG side 2-0 in the French Ligue 1 on Sunday.

The 19-year-old who scored the winner for Rennes in the Europa Conference League in midweek, was at it again on Sunday as he set up French forward, Gaetan Laborde to open the scores against Messi, Neymar, Mbappe and on the stroke of halftime at the Roazhon Park.

Sulemana sent a precise lofted cross into the box which the Frenchman latched on to finish with a quick shot that sailed into the bottom left corner, leaving PSG goalkeeper Gigi Donnarumma with no chance.

Kamaldeen Sulemana face to face against Lionel Messi during the game

Just seconds after the interval, Rennes doubled their advantage after Flavien Tait found some space deep inside the box to fire a volley into the back of the net, leaving the keeper helpless once more in the 46th minute.

They held star-studded moneybags of PSG at bay until the end to seal a shock victory and with it three crucial points to up their season’s tally to 12 points from 9 games.

Despite the loss, PSG will maintain first place on 24 points after winning all of their opening 8 league games until now.

The Techiman-born Sulemana has hit a rich vein of form for Rennes in both the Ligue 1 and the Europa Conference League after only joining the French club this sunmer.