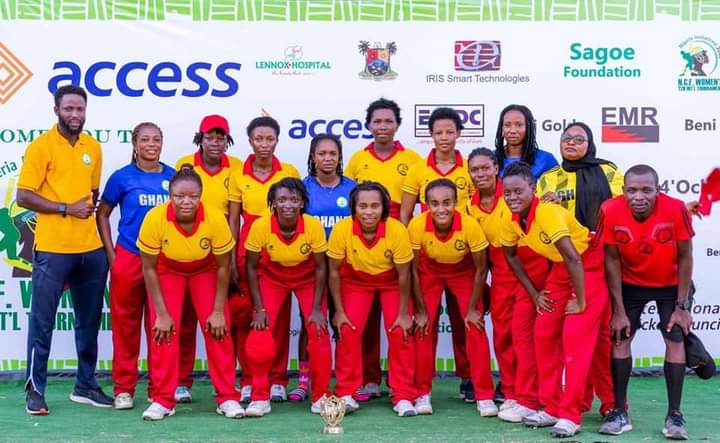 The Rare Queens qualified to play Sierra Leone on Sunday, April 3 for the 3rd place game, after the later beat Gambia on Saturday April 2, 2022.

Ghana, having already lost once to the Lady Cricket Patriots by 87 runs won the toss and elected to bat first and scored 90/1 in 20 overs, with captain Rhyda Amanfo Ofori 24(20) and Felicia Serwaa 16(13) being the top performers.

Sierra Leone needed 13.4 overs to score 91/0 and win the game by 10 wickets to emerge bronze medalists. Fatu Pessima with 4-0-14-4, was adjudged the player of the match.

Ghana, have now lost four times against Sierra Leone, twice at the just ended tournament and twice at the 2015 NWACC tourney in Gambia. Ghana however hold a single win against the Lady Cricket Patriots, which was in the 2018 edition of NWACC held at the Achimota Oval, Accra.

Ghana head coach, Obed Harvey in a post-match interview admits, they have picked a lot of positives from the tournament.

“Overall, it has been an okay performance across board. There are positives that we would take from a positive note, as in participating and getting exposed to how competitive we can be when we step up,” he said.

“We can perform well, if we put ourselves together and put things in place, preparation, getting the girls to understand that, now it all relies on us and how strong we can exhibit our knowledge and awareness in cricket,” Coach Harvey added.

“So far, it has been okay, not the best we were hoping for. This team is in the building stage that we have to give credit to that fact that it is a process and we have to trust the process and make it look much better when the time comes,” the Team Ghana cricket coach affirmed.

The one-week tournament organized by the Nigeria Cricket Federation saw Rwanda taking revenge on the hosts to win the ultimate, while Nigeria picked silver medals at a colorful closing ceremony, right after the finals.

Rwanda, who lost by 3 runs, in their earlier game took Nigeria all out for 76 runs in the second innings after they have scored 129/5 in the first innings, to win by 53 runs.

Rwandan won the best batter accolade with a total of 162 runs and a strike rate of 115.71 from 4 innings.

In the batting performance, Ghana’s Felicia Serwaa ended 6th with a total of 56 runs and a strike rate of 74.67, while compatriot Kate Awuah, with 45 runs from 5 innings, finished 8th.

This has been the third international tournament for the senior women’s cricket team and definitely a tournament with great lessons to pick home as the development of girls’ cricket in Ghana keeps growing.

Team Ghana are expected to touch down at the Kotoka International Airport, terminal 3 at 9am on Monday, April 4, 2022.