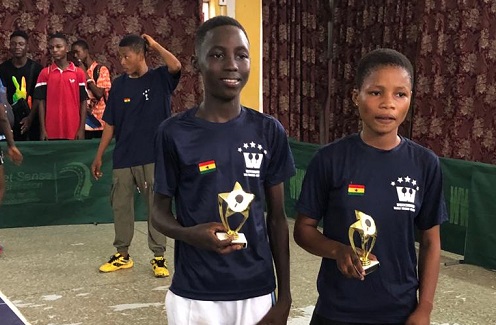 In a highly competitive atmosphere with over 30 young table tennis stars vying for the ultimate, it was Osei who proved the most talented after he beat Derrick Assigbey three sets of 11-9, 11-6, 11-8 in the final game to win the day.

Throughout the games Osei proved to be the player to beat with his skill as he easily dispatched his opponents in the qualifying stages through to the semi final where he also stunned Charles Kwose 2-1 in another competitive encounter.

The girls’ competition was equally exciting with Blessing Labanti emerging as the surprise victor when she won in three sets with 11-9, 11-7, 11-9 after beating Mary Bortequaye.

Bortequaye, one of the pre-match favourites also gave a good account of herself in the semi finals when she easily dispatched Sophia Afia Serwah 11-2, 11-9 while Labanti was also on fire in the semifinal beating Emmanuella Yaa Kyere 11-3, 11-3.

Organiser of the tournament, Courage Nanevie, was grateful to the players for their commitment and promised to support the winners through sponsorship.

He said his main reason for organizing the tournament was to identify some young talent and groom them to take up from the aging national stars and promised to mentor these players and support them to become much better than his generation.