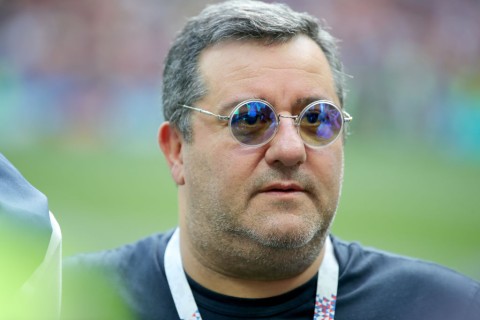 Mino Raiola’s friends have contradicted reports in Italy that he has died but say the high-profile football agent is fighting for his life in hospital.

Various news outlets in Italy claimed Raiola had died on Thursday afternoon and Real Madrid’s official Twitter account expressed their condolences to his friends and family.

Raiola, 54, has been unwell for several months and is battling a lung disease.

But his colleague and friend Jose Fortes Rodriguez says he has not died, telling NOS: ‘He’s in a bad position, but he hasn’t died.’

A tweet from Raiola’s official account was later sent which said: ‘Current health status for the ones wondering: p****d off second time in 4 months they kill me. Seem also able to resuscitate.’

Raiola, who is believed to be receiving treatment in Milan’s San Raffaele Hospital, has represented the likes of Paul Pogba, Erling Haaland and Zlatan Ibrahimovic.

Back in January, Raiola underwent checks in Italy after reports said he was rushed to hospital for surgery.

German newspaper BILD said he was intensive care due to a lung disease, although his spokesperson downplayed the visit, saying: ‘Mino Raiola is undergoing the usual medical examinations that require anesthesia. Everything was planned and there were no emergency surgeries.’

Raiola was born in Nocera Inferiore, Italy in 1967 and emigrated with his family to Haarlem in the Netherlands the following year.

A promising footballer growing up, Raiola took over the reins as the head of HFC Haarlem’s youth team aged just 20 in 1987 before beginning his career as a football agent.

He would go on to represent more than 20 of the game’s top stars across European football and was last year said to be worth around £62million, having reportedly received a £41m cut when Pogba rejoined Manchester United in 2016.

One of Raiola’s biggest clients, Norway striker Haaland, is set to join Premier League champions Manchester City at the end of the season in a deal worth more than £500,000-a-week.