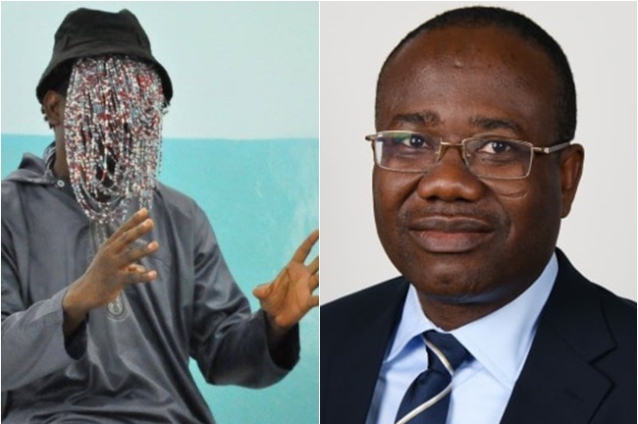 A former Ghana Football Association (GFA) president, Kwesi Nyantakyi, has pleaded with the Supreme Court to quash an order of the Accra High Court for investigative journalist Anas Aremeyaw Anas to testify in camera.

The former FIFA Council member described as “erroneous” a decision of the High Court to have the testimony of the CEO of Tiger Eye PI outside public view, claiming due process was not followed.

An application at the Supreme Court on April 29, 2022, noted that the Republic requested an in-camera hearing of Anas Aremeyaw Anas, the principal witness of the matter between the Republic and Mr Nyantakyi.

“Our witness Anas Aremeyaw Anas we pray that his testimony is heard in camera,” the prosecution applied to the court orally in March.

A portion of the application said “…it is evident from Applicant’s lawyer’s objections to how the High Court’s discretion was invoked for a dispensation that the reasons for which the prosecution made the prayer were not clear.

“This is put beyond doubt by Applicant’s lawyer’s submission which is captured in the record as follows;

“…this will have the opportunity to let us know why he wants to testify in camera. (sic)”

Applicant’s lawyer preceded the reason above stated by the submission that; “…it is proper he comes formally, file a motion and support with an affidavit why his witness wants to testify in camera….”

“The High Court ignored Applicant’s lawyer’s objection to the prosecution’s prayer for its witness to testify in camera and proceeded to deliver itself of the decision which is the subject of the application before the Court,” it stated.

Mr Nyantakyi, who was rearrainged before Criminal Court 2 of the High Court on March 24, 2021, after he was discharged by Criminal Court 4 of the same court on March 11, 2021, by Justice Comfort Kwasiwor Tasiame wants Anas to testify in open court and not in-camera.

His legal team noted that, the constitution requires the “Court to conduct hearings in public”, and that the High Court order for the CEO of Tiger Eye PI to testify in-camera is ” erroneous,” as it violates the Constitution, though they noted the adjudicating authority may order that its proceedings be held outside the public view in the interest of “public morality, public safety, or public order.”

Nyantakyi, a former 1st Vice President of CAF, and FIFA Council member was discharged in March 2021 by Justice Comfort Tasiame of Criminal Court 4 of the Accra High Court on the basis that the case had adjourned for more than a year.

She noted in her decision that “I think the prosecution may need a longer time to put their house in order. It’s been one year since we set out to do a case Management Conference but due to the excuse by the Learned Counsel for the Republic, that they have a witness statement to file, we kept adjourning this case till today.

“I think in these modern times there can be a way out for prosecution who has the whole state apparatus behind her to file a witness statement without us going and coming.”

“Justice delayed they say Justice denied. Justice is two-way traffic for prosecution and accused as well,” the respected Judge noted.

“As it stands now, I have no option other than to discharge the accused persons. Any time prosecution is ready, they can do the needful.

However, Counsel for the Republic Victoria Asieduaa, proceeded to Criminal Court 2 of the High Court on March 24, 2021, to have the case heard afresh.

Nyantakyi filed an opposition against the move of the Republic, requesting that the case be taken back to Court 4, but on June 7, Justice Elfreda A. Dankyi ruled that the case will be heard in her court.

The Republic finally filed its witness statements after two years since the former WAFU B President was charged, and wants his testimony in camera, which was granted on March 9, 2022.

“The court is of opinion that based on the relevant sections (sic) of the Constitution the testimony of the witness Anas Aremeyaw Anas will be held in camera,” Justice Dankyi ruled.

However, there are arguments that, first, the premiere of the ‘Number 12’ documentary was done in the open without any security concerns, so why would a hearing in court with full security be done in camera and not in an open court?

“Tiger Eye PI and its CEO, Anas Aremeyaw Anas went public with the video documentary because it was in the public interest and should have his testimony in open court, too. The public has an interest in his testimony,” they said.

Kwesi Nyantakyi and Abdulai Alhassan were slapped with three charges including fraud by the Accra High Court in March last 2020.

Two other charges were conspiracy to commit fraud and fraud for their roles in a documentary dubbed number 12 by Tiger Eye PI.

They have made almost 20 appearances in court since the case began two years ago.