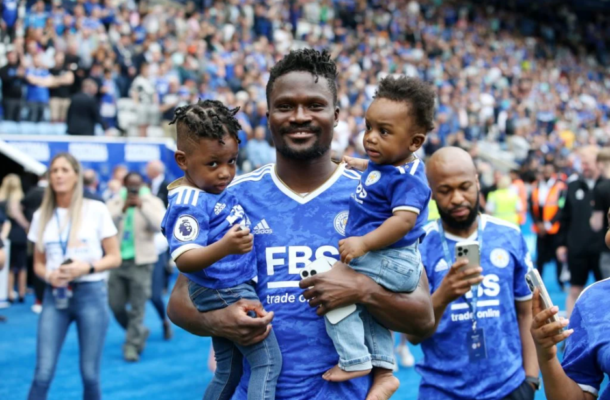 Ghana and Leicester City defender Daniel Amartey has showcased his two adorable kids on the final day of the English Premier League season as his side faced Southampton at the King Power Stadium.

The centreback was introduced into the game in the 82nd minute  as replacement for James Maddison as his side cruised to a 4-1 win.

Leicester City who were not at their best this season  finished a distant eight and will not take part in any European campaign next term.

James Maddison scored four minutes after the restart, before Jamie Vardy made it 2-0 with a quarter-hour to play.

James Ward-Prowse pulled one back for Saints with a 79th-minute conversion from the penalty spot, but Ayoze Perez restored Leicester’s two-goal lead moments later.

Perez added to his tally, turning in Ricardo’s

Southampton ended the season in 15th place in the table on 40 points whilst Leicester collected 52 to finish eighth.
Daniel Amartey made a combine total of 40 matches scoring one goal the whole of the season across all competitions a far cry from last season where he was overlooked for much of the campaign.

After the game the Ghanaian defender stepped onto the pitch with his two adorable kids as the team went on a lap of honour.

The defender was integral for the Black Stars as Ghana beat Nigeria to secure a place at the 2022 FIFA World Cup.