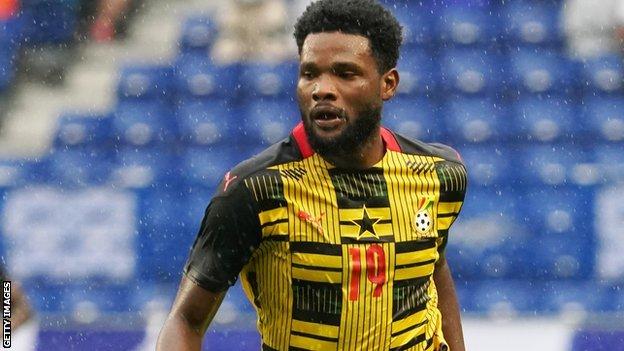 Black Stars striker Benjamin Tetteh is facing up to six weeks out after picking up a hamstring injury in the English Championship last weekend.

The Hull City striker picked up a hamstring injury when the Tigers lost 2-0 at home to Sheffield United on Saturday at the MKM Stadium.

Tetteh was replaced with Ryan Longman in the 14th minute after he was stretched off the field after failing to continue the match.

The 25-year-old will be missing Ghana’s upcoming international friendly matches later this month after doctors confirmed on Tuesday he will be out of action for four to six weeks.

“The medical staff are doing their best.”

Tetteh has been named in Ghana’s 29-squad list for the upcoming international friendlies against Brazil and Nicaragua but won’t be available for the two games due to his injury.

The former Ghana U20 striker signed for the Tigers this summer from Turkish Superlig club Yeni Malatyaspor.

The 25-year-old played 8 matches in all competitions and has provided three assists as he yet to score his first goal since joining.