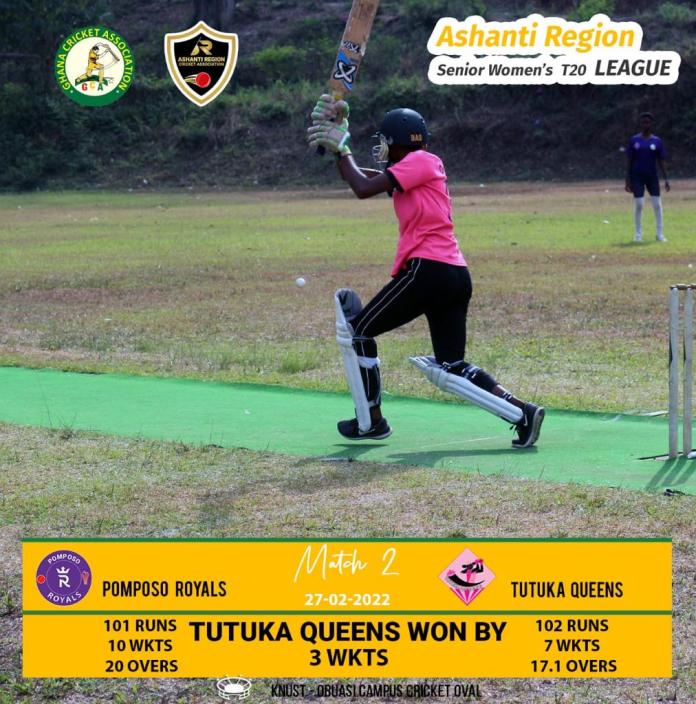 The violets, who had their captain, Rhyda Amanfo (31-45) starting the game through to the 19.3 overs, scored 101 runs, all out in 20 overs. Beatrice Oduro of Tutuka Queens became a thorn in the flesh of Pomposo, as she took 4 wickets, gave away 12 runs in 4 overs.

Tutuka, who finished 3rd in last year’s league needed 102 runs, for 7 wickets in 17.1 overs to win the game by 3 wickets. It was all joy for Tutuka, who had their first win over Pomposo in the league.

In an earlier game, last year’s runners up Royal Batters got off to a good start as they dispatched off White Hawks by 9 wickets.

The Hawks had to humble themselves in front of the Royals, as the former scored 50 runs, all out in 18.2 overs in the first innings. Patricia Suglo, Cynthia Ankobea and Emmanuella Nyaaba took 2 wickets each in their massive restriction.

Due to unforeseen circumstances, only 1 match each was played on the beginning weekend.

Actions however continue come Saturday, March 5, 2022, where Tutuka Queens sets up a tie with leaders Royal batters in the morning, before White Hawks host Pomposo Royals in the afternoon.

The selection for the International Women’s T20 Tournament in Nigeria has just began, as female national team Head Coach, Obed Harvey looks out for a formidable side for the TBS showdown come March 26 to April 4, 2022.