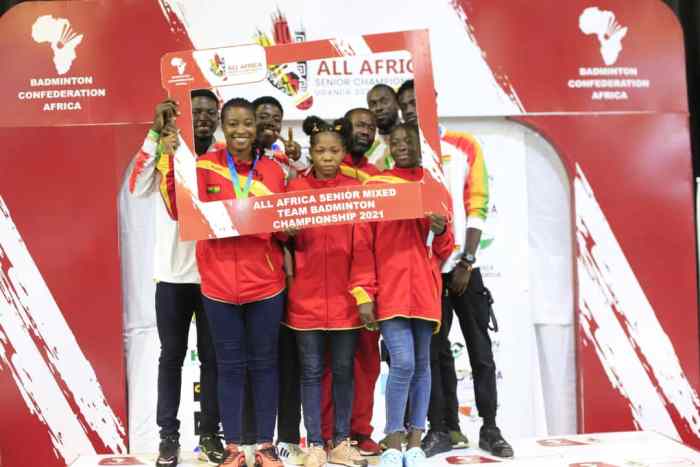 The Ghana Badminton Association (BAG) has officially named its squad for the upcoming 2022 Birmingham Commonwealth Games.

The five-man team made up of three men and two women would compete in all five events of Badminton at the Games.

Coach Moses Adu, Ahmed Abdul Samad, Kelvin Evans Alphous (Captain), Cindy Esi Etornam Tornyenyor, Prospera Nantuo, and Aaron Dromo Tamakloe will lead the players to represent the National Badminton Team-Golden Shuttlers and capitalize on the once in a lifetime opportunity to bring home success in our own country.

After the national selection criteria, Linked here the Badminton players that will represent Team Ghana across Singles, Doubles, Mixed Doubles Events are:

NANTUO, Prospera, Upper East Region–Nantuo has been holding her own on the Doubles, and Mixed Doubles. It crowned championships across Africa in recent years and had been Ghana National champion at the age of 21.

Nantuo Prospera celebrates a point at the 2021 All African Championship

She will hope to make her mark at a first multi-sport Games, and she makes her Team Ghana debut.

Cindy, has built a badminton history of her own, having won National Doubles event from 2018 and represented Ghana internationally in Mix Team Events.

Alphous will aim for a run at a Commonwealth medal after his Mix and Men Doubles partnership with Ahmad Samad and Prospera Nantuo caught fire in its first full season since 2018. Four years after playing together, the pair took home gold medals in international events. He is the raining Men and Mix Doubles National record title.

As one of the most experienced Golden shuttlers in Ghana, Samad will aim to build on the Men Singles Achievement-The highly African ranked Men’s Doubles and Men’s Singles Player building on the success of his Men’s Doubles highly world ranked

Having won match events at his maiden African Championships in November 2021 and made his bow in the same season, Tamakloe-now has a chance to shine at the Multi-Sport Games in Mix and Men Singles Events-One of the most successful Ghana shuttlers of the modern era and has reached the top of the three in two doubles events.

Speaking on her excitement about being part of the team, Cindy shared “It’s such a glorious honor to be part of Team Ghana and I can’t wait to get out there and do my very best at the Games with support from the nation, friends, and family!”

Commenting on coaching, Head Coach, Moses Adu, added, “I feel incredibly proud to lead on the success of our high-performance plan with its coaching opportunity at a multi-sport level and we will do the nation proud”

Hoping to continue our seventh Appearance at the Commonwealth Games success, the Ghana Badminton President shared “the Commonwealth Games is a very notable event for all of us in Ghana Badminton and the Board and all persons of the sport. Our squad is a blend of youth and experience, but all very talented players and highly world ranked. We are highly optimistic of success in this endeavor as our long-term athlete development plan with its success is bringing the needed results in performance across the sporting popularity in the country. We are also elated to be guided by Prof Oluwaseun O. Omotoyo, the Head of Department of Sports and Exercise Medical Sciences (SEMS), University of Health & Allied Sciences, Ho for his eminence as a renowned World Sports psychologist for our team  ”

Ghana Badminton Association would be making their seventh appearance at the Commonwealth Games after their debut in 1998 Games held in Kuala Lumpur, Malaysia.

You can be part of the team by following by following it’s our social channels where each athlete will be performing in Birmingham. Ghana Badminton will be competing from July 30th- August 8th, 2022, at the NEC Hall, Birmingham after an initial 6-day training camp in the United Kingdom.

The Commonwealth Games is a multi-sport event with a fully integrated programme of para sport disciplines and this year’s Games promises to be extra special with full stadiums and arenas after Tokyo 2020 took place behind closed doors. Birmingham 2022 is set to have the largest ever female and para sport programme in history after a new discipline of Women’s T20 Cricket and Beach Volleyball and Para Table Tennis were confirmed.