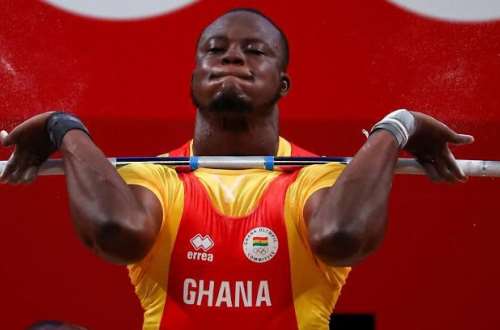 Ghanaian Weightlifter, Christian Amoah, has turned his attention to the 2022 Commonwealth Games after missing out on a medal at the Tokyo 2020 Olympic Games.

The 22-year-old finished fourth in the men’s 96Kg in the weightlifting event at the Tokyo Olympic Games.

He cleared the first round successfully, making the 140 snatch and 165 clean and jerk.

The second round proved a daunting task for him, only clearing the 145 snatch and 170 clean and jerk on the second attempt.

This handed him a total of 315 and a position above Palestinian Hamada Mohammed and well behind Greece’s Iakovidis Theodoros (338), Tchatchet II Cyrille, a refugee Olympian (350), and Cuba’s Saez Vera Ofildes (359).

Speaking in an interview with Happy Sports, Amoah indicated his focus is now on the Commonwealth Games and the African Games in 2023.

In the Commonwealth Games, I will give Ghana a medal because I have gained more experience. Now that we are coming to prepare for Commonwealth Games and Africa Games I will also help to recruit young people as well”, he added.