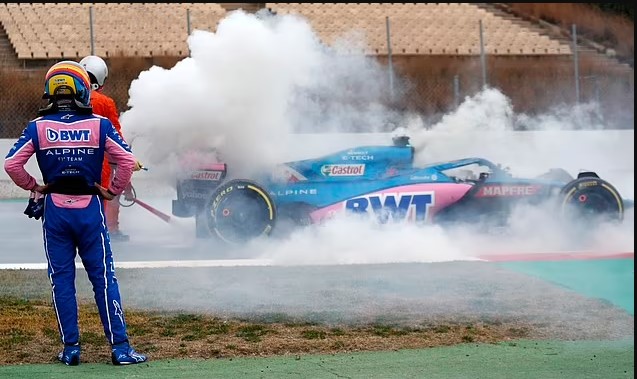 Fernando Alonso was forced out of his car on the final day of Formula One pre-season testing in Barcelona after the vehicle went up in smoke.

The Spaniard, world champion in 2005 and 2006, recorded a faster lap than reigning champion Max Verstappen on Friday.

But a promising morning for his Alpine team turned nasty when smoke billowed out of the vehicle at turn 13 on the Circuit de Barcelona-Catalunya.

However, Spanish newspaper Marca said the problem arose when the team tried to test the limits of the motor, which had already done 250 laps and was suffering from wear and tear.

It was the third technical issue to flare up this week in Barcelona after Red Bull’s Sergio Perez suffered a gearbox failure and Nikita Mazepin of Haas experienced a problem with his fuel pump.

Earlier in the week, Alonso made some surprising comments about the decisive Abu Dhabi Grand Prix.

But the incident is a blow to Alonso, who has struggled for a decent car for more than a decade

The Spaniard, who used to have a fierce rivalry with Lewis Hamilton, claimed there was ‘nothing wrong’ with how the race ended and Max Verstappen pipped Hamilton to the championship following race director Michael Masi’s decision to allow lapped cars to unlap themselves after the safety car was forced out.

Masi was sacked following the decision, which enraged Mercedes and led to fierce criticism from many voices in racing.

Alonso had criticised Masi before but said he hoped he had not been removed as race director due to events in Abu Dhabi.

‘On the whole theme of Abu Dhabi, maybe I have a different opinion, I don’t think that there was anything wrong there,’ Alonso told The Race.

‘I don’t think that they changed it [the race control structure] because of Abu Dhabi, or I hope not.’

Alonso was one of the most outspoken drivers over the officiating during the 2021 season, and even called Masi ‘too soft’ before the race in Abu Dhabi after the race director failed to take action on a driver from effectively blocking his qualifying lap.