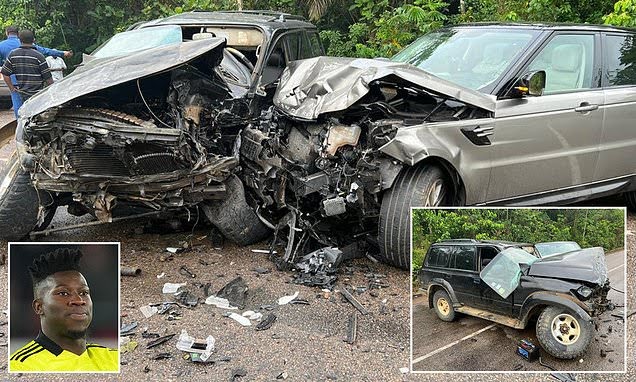 Ajax goalkeeper Andre Onana has reportedly been involved in a sickening car crash on his way to play for Cameroon in their World Cup play-off against Algeria.

Horrifying pictures show two cars smashed into each other at the front, with both bonnets destroyed and the ground covered in debris.

Onana had been travelling to Yaounde, the capital of Cameroon, when he was caught up in the accident, as reported by the Sun, but the 25-year-old has fortunately escaped unscathed.

He was headed to Cameroon’s training camp in Douala at the time of the incident, the report adds – with no casualties reported in the collision from either vehicle.

Onana is still on course to start for Cameroon in their crucial World Cup on Friday despite being involved in the incident, it says.

A Champions League semi-finalist in 2019, Onana has been rated as one of the most exciting young goalkeepers in world football in recent years before his career was blighted by a failed drugs test.

He was banned for one year by UEFA after testing positive for Furosemide last February, but claimed he had accidentally taken his wife’s medication.

After an appeal, his suspension was reduced to nine months by the Court of Arbitration for Sport (CAS) after finding ‘no significant fault’ from Onana.

Onana – who will leave Ajax on a free transfer this summer – explained the pain of trying to clear his name and remain focused despite being unable to set foot on the pitch during his suspension.

‘I woke up with a headache and took a pill,’ he says of events back in October 2020. He thought he was taking Litacol, which the club had prescribed him. But instead he took Lasimac, prescribed to his wife to combat water retention. UEFA recognized that the tablets were very similar in appearance and that there was no intention to cheat but there still had to be consequences.

‘I took the tablet without a second thought and when I was picked for the random tests and I was the first to run across and get it over with,’ he says. A 12 month ban reduced to nine months followed.

‘In the end the law says that you are responsible for everything that goes into you. If today I go into a shop and I buy a bottle of water and the water is contaminated, it’s my responsibility.’

He told of how he felt like ‘an outcast’ during his exile from the game – fearing for his place in the team at both Ajax and Cameroon.

‘When you are banned, you can’t do anything, you can’t even step foot on the (normal training) pitch.

‘The first thing I did was put together a team of coaches but it’s not easy to find a qualified coach who is not working. You have to find your psychologist, your fitness coach, a physio and a nutritionist.

‘I tried to always see the positive side but there are times when you can’t find it. As a goalkeeper it’s difficult. Now someone else is playing in your place. Only one can play in that position.’

Onana has been linked with a number of top teams over the years – including Arsenal – before his failed test derailed a transfer to a top team across the continent.

But with his contract expiring this summer, Onana revealed he is seeking ‘a new challenge’ after confirming his ‘time is over’ in Amsterdam.

‘I have done my best for this club, so I think it was important for me to look for a new challenge.

‘I think I did a great job for this club for so many years already and I think that my time is over in Ajax.’