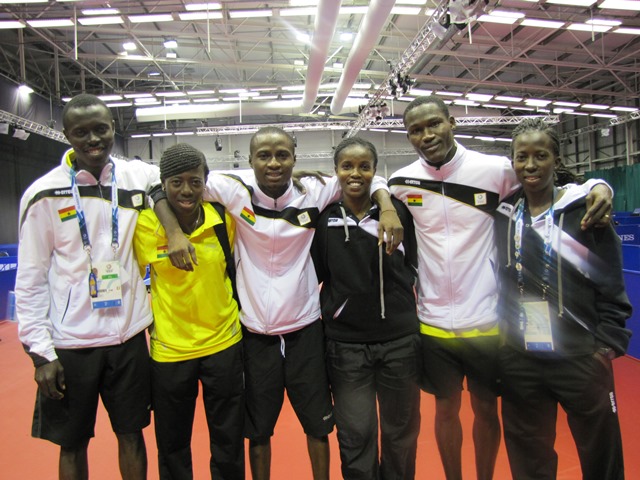 The Jamaicans had beaten Ghana in the two previous editions of the Commonwealth Games in Delhi and Melbourne prior to the encounter.

Ghana’s Table Tennis Team secured a sweet revenge over Jamaica after winning their semi final classification game 3:1 at the ongoing Commonwealth Games at the Scotstoun Campus in Glasgow on Saturday.

Coach Anthony Owusu Ansah’s team missed the chance to qualify to the next stage of the competition after losing their last group game against defending champions Singapore.

Despite placing third with an overall score of three points in their Group, Team Ghana quickly re-grouped to play the classification games, beating Papua New Guinea and Vanuatu, before meeting bogey their side Jamaica.

The Jamaican’s had beaten Ghana in the two previous editions of the Commonwealth Games in Delhi and Melbourne prior to the encounter.

Felix Lartey won his singles event before partnering Derrick Abrefa to win the men’s doubles. Emmanuel Commey put the icing on the cake with another men’s singles victory in a closely fought encounter.

Team Ghana player, Derrick Abrefa could not hide his joy after the game saying, “The Jamaican’s have sat on our happiness for a long time. It was a similar situation to the Ghana vs USA game prior to the 2014 World Cup. I’m glad we have been able to beat them today.”

Head coach of the Table Tennis team, Anthony Owusu Ansah commented about his team’s exploits: “It shows we have made progress. If we have similar pre-Games preparation in the future, then we will do far better. The players have responded very well to the training and we hope to do better.”

Ghana will meet Guyana in the final classification game on Sunday to determine final placements for the 15 and 16 positions respectively.