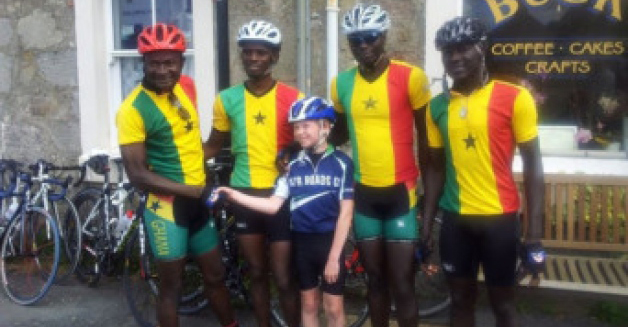 A Ghana Olympic Committee sponsored national cycling team has arrived in Morocco to participate in an African Continental Rio 2016 Qualifier.
The four man team, which includes Anthony Boakye, Frank Akuffo, Clement Kusi and Abdul Razak Umar, left Accra on Friday morning for the trip.
In sponsoring the national teams for the qualifiers, the GOC is going beyond its core mandate of leading Team Ghana to the Olympic Games after National Sports Federations and the National Sports Authority have prepared and supported the national teams to qualify for the Games
The Ghana Cycling Federation is the fourth national sports federation to benefit from the Ghana Olympic Committee’s drive to assist prospective Ghanaian sportsmen/women to qualify for Rio 2016.

The GOC has previously sponsored the national taekwondo, table tennis and badminton teams to participate in African Rio 2016 Continental qualifiers.
In a bid to assist Ghanaian sportsmen and women who have the best chance of qualifying for the Rio 2016 Olympic Games, the GOC has stepped up its efforts in supporting Ghana’s national teams, paying air fares, accommodations fees, among others.
Presently, only one Ghanaian athlete, 800m runner Alex Amankwah, has qualified to participate in the Rio Games but the qualification window for most disciplines closes between May and June, 2016.