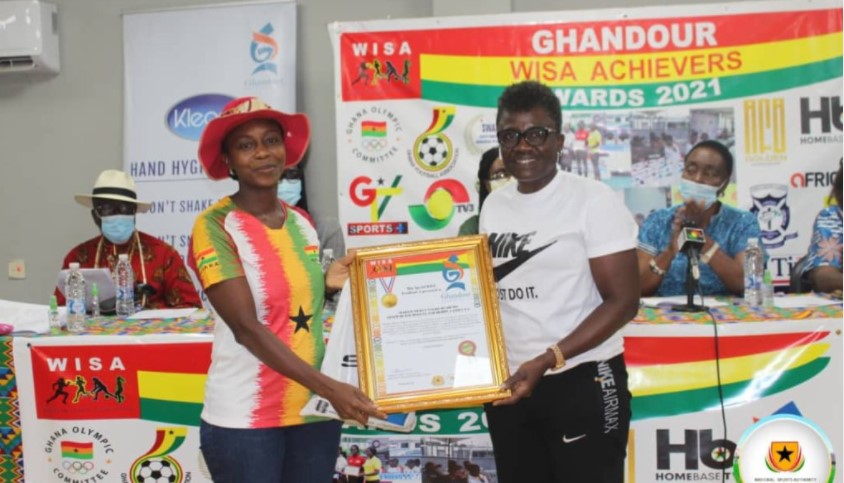 The Women in Sports Achievers’ Awards (WISA) organized by GHANDOUR was held earlier today at the Media Center of the Accra Sports Stadium. The event was to honor Women in the various sporting disciplines across the country.

The President of WISA, Madam Gloria Commodore expressed her gratitude to the sponsors, awardees and the National Sports Authority continuous support given them in making of the event. She added that, despite the challenges, the major sponsors thus GHANDOUR COSTMETICS and AFB GOLDEN PRODUCT assisted in making the event a success. She further petitioned NSA to support in future for such programme to aid in sports developments.

Madam Gloria Commodore in her keynote address, mentioned that, 48 awards will be presented to honor athletes, sports journalist, administrators and retired sports women. This will encourage and acknowledge the various individual contributions made by them within the sporting fraternity.
Special awards were presented to some outstanding females that were present at the just ended Tokyo 2020 Olympic Games thus the Mackorley Sisters from the Table Tennis Federation.

President of the National Women’s Sports Federation, Madam Joyce Mahama urged women to vie for higher positions within the industry. She added that if all women come unto the platform, they will have the voice to speak against the abuse and surge forward.

Speaking on behalf of the Director General of the National Sports Authority, Prof Peter Twumasi, Mrs Vivian Dougblor, Director of Sports (Development) extended his greetings and commended the organizers and awardees. She assured them of the Authority’s continuous partnership with them. She again assured them of policies that will be made available to them at all levels for women in sports development and promotion.