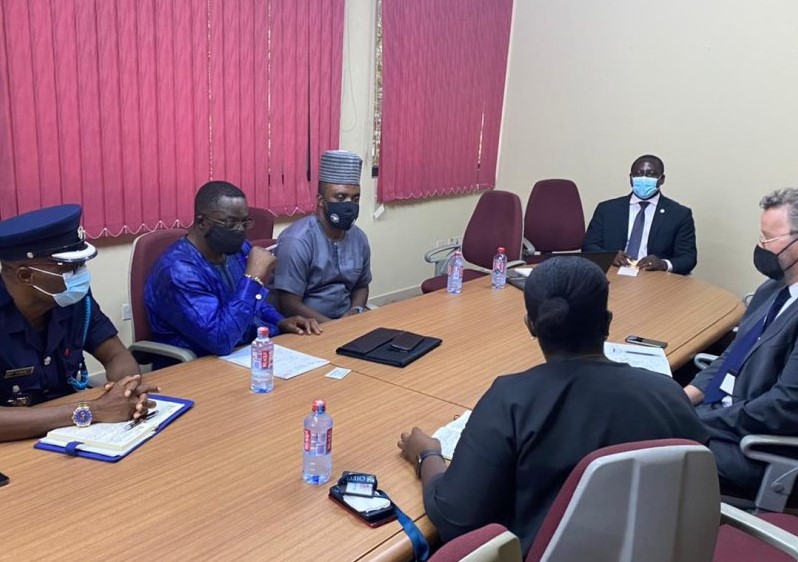 Officials of the British High Commission in Ghana on Wednesday, October 6, visited the Commonwealth Games Federation, Ghana, to meet the Games Committee on preparations towards the arrival of the Queen’s Baton Relay.

Ms. Charlene Mills and Mr. Malcolm Hood who represented the British High Commission discussed the route and personalities who would handle the Baton on its arrival in Ghana from October 25-28 and would be seen in places like Tema and Kumasi, the garden city.
President Nana Akufo Addo is going to be the first personality to hold the baton when it lands in Ghana.
Present at the meeting were Messers Ben Nunoo Mensah, President of the Commonwealth Games Federation, Ghana, Fred Lartey Otu, Chairman of the Games Committee, Isaac Aboagye Duah, Melvin Brown, Hayye Yartey, Mohammed Mahadi and Mrs. Delphina Quaye.
The Queen’s Baton Relay has been an essential part of the Commonwealth Games for more than 60 years.
Typically, it takes more than a year to complete and provides a vital connection to all the nations and regions of the Commonwealth.
It has become the longest relay of its kind in the world.
The exact origins of the ritual are unclear, although it was introduced as a prelude to the 1958 Commonwealth Games in Cardiff.
The baton usually starts its journey at Buckingham Palace in London, but in 1970 Queen Elizabeth II sent her message to the athletes of Edinburgh from Canada’s Northwest Territories.
In 1974, the Relay for Christchurch began from Sandringham, the Queen’s residence in Norfolk.
From 1990 onwards, the Queen’s Baton Relay has become ever more ambitious and in 2006 it visited all of the Commonwealth nations and territories for the first time en-route to Melbourne.

“We wanted as many hands as possible to touch it so that The Queen knows that in her family throughout the Commonwealth, as many people have the chance to touch it and see her message,” Commonwealth Games Federation President Dame Louise Martin has said.

More than 8,000 bearers carried the baton over a distance of 230,000 kilometres.
Birmingham is the venue for the 2022 Commonwealth Games.
Credit: GNA