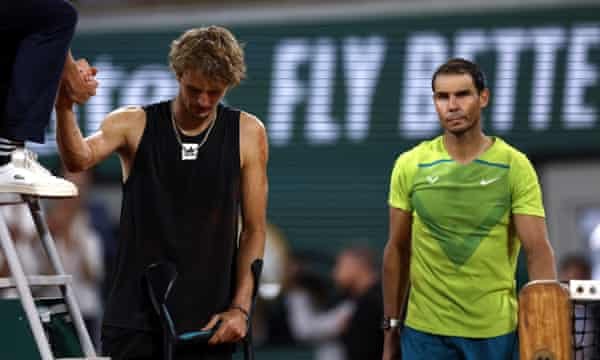 Rafael Nadal is a French Open finalist for the 14th time in his career as a gripping, lengthy and messy semi-final ended with Alexander Zverev being forced to retire in the second set. Zverev badly twisted his ankle while chasing a ball and was taken off the court in a wheelchair.

After competing for over three hours without completing the second set, Nadal won 7-6 (8), 6-6 ret. to advance to the final.

Nadal, who was celebrating his 36th birthday, will play for a record-extending 14th French Open title and 22nd major title, with his French Open win-loss record now 111-3 (97%). After his triumph at the Australian Open, he will attempt to win the first two major tournaments of the year for the first time in his career.

“Very sad for him, honestly, he was playing an unbelievable tournament,” Nadal said of Zverev, who had reached the semi-final for a second successive year. “He’s a very good colleague on the tour. I know how much he’s fighting to win a grand slam but for the moment he was very unlucky. The only thing I’m sure of is that he is going to win not one [but] much more than one. So I wish him all the very best.”

Nadal will face Casper Ruud, the eighth seed, in the final after he recovered from a set down to defeat Marin Cilic 3-6, 6-4, 6-2, 6-2 and reach his first grand slam final. Ruud is the first Norwegian player in the open era to reach a major singles final.

In the earlier semi-final, as rain fell around Paris, the new Roland Garros roof was used for the first match of real consequence this year. While Zverev stepped inside the baseline and effectively hit through the conditions, Nadal’s topspin was blunted in the humidity, with the ball fluffing up.

He called them some of the slowest conditions he has played in at Roland Garros. “I think the conditions were not the ideal for me this afternoon,” Nadal said. “That’s why I was not able to create the damage that I wanted over him.”

It began with an almighty, 92-minute opening set, which Zverev entered on fire. He served almost perfectly early on, crashing down first serves, landing well over 80% of them and demolishing the ball from inside the baseline as the match was on his racket.

As the stakes rose, though, his familiar struggles with his second serve and forehand surfaced. Zverev lost his serve then saved three set points and rebounded to lead 6-2 in the tiebreak. Against almost anyone else the set would have been over, but Nadal saved all four set points. After Zverev missed an easy volley at 6-3, Nadal pulled off a particularly outrageous angled forehand passing shot winner on the following point.

Even as Nadal continued to struggle with his game, he is supreme in the tight moments and he rose to rob the set from Zverev with a thunderous forehand down-the-line passing shot winner. He called his incredible recovery a “miracle”.

Nadal broke serve in the opening game of the second set. But instead of separating himself, he threw in a series of dire service games and a messy set followed. Nadal struggled from the baseline, relying heavily on drop shots in lieu of any weight on his groundstrokes, and Zverev twice double-faulted on break points, including three double faults while serving for the set at 5-3. In total eight of the first nine games of the second set were breaks of serve.

As the pair were heading for a tiebreak, Nadal attacked at game point on his serve and Zverev badly twisted his right ankle while chasing down a forehand. He immediately began screaming in agony and was promptly escorted out of the court on a wheelchair, a rare sequence that underlined the severity of his injury. After a short time, in which Nadal also went off court, Zverev returned to the court on crutches and saluted the crowd, which gave him a standing ovation while his retirement from the match was confirmed.

Afterwards Nadal said that, when he went to see Zverev in the locker room, he had immediately undergone an ultrasound scan to check his ankle.

It has been a super-tough match, over three hours and we didn’t even finish the second set,” Nadal said. “So it’s one of the biggest challenges on the tour today when he’s playing at this super high level.

“Difficult to say a lot of things today in this situation. Of course, as everybody knows, to be in the final of Roland Garros one more time is a dream, without a doubt. But at the same time, to finish that way … I have been there in the small room with Sascha [Zverev] before we came back on court. To see him crying there, it’s a very tough moment, so all the best to him.”