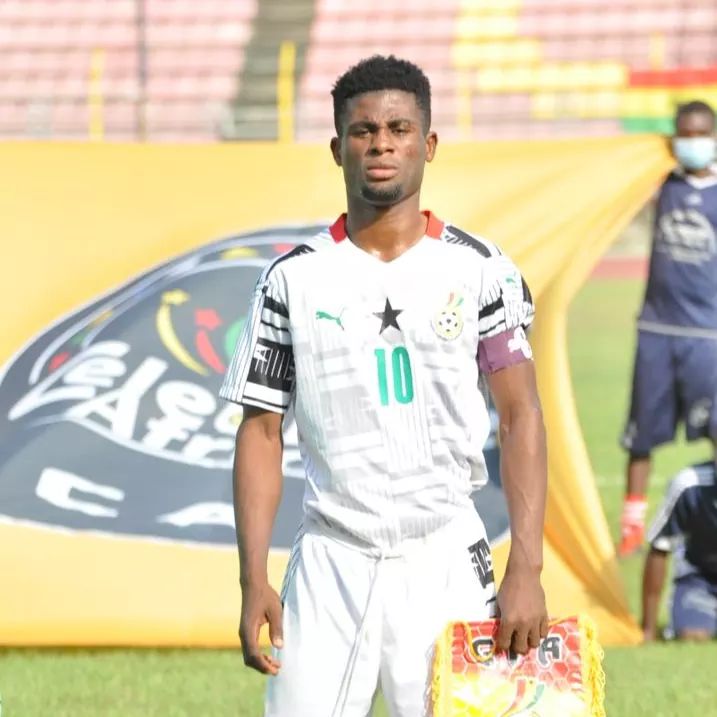 For Daniel Afriyie Barnieh, the upcoming betPawa Premier League season could be a turning point in his career as it starts just around the time Ghana’s technical team will be keeping the tabs on players shortlisted for the 2022 FIFA World Cup in Qatar.

In the last two years, he has worked his way from a promising young player in the league to, perhaps, the most influential player at Hearts of Oak and also among the privileged few to have caught the eye of Black Stars coach Otto Addo.

It was not until the 2021 U-20 Africa Cup of Nations that the young forward caught international attention as he captained the national team, Black Starlets, to win the continental competition in Mauritania. His leadership role and overall performance, including scoring two decisive goals which gave Ghana victory over Uganda at the Stade Olymique de Nouakchott brought back a trophy which had eluded Ghana since 2009.

Even though the Satellites were denied the opportunity to represent Africa at the World U-20 Championship in Indonesia, cancelled by FIFA as a result of the global COVID-19 pandemic, the tournament in Mauritania marked a turnaround in the career of Barnieh, who became a very influential member of the Hearts of Oak team which dominated the domestic scene with Premier League and FA Cup triumphs two seasons ago.

He scored only three goals in 22 league appearances – and seven goals in all competitions – as Coach Samuel Boadu’s side to end an 11-year league title drought as the Phobians claimed the domestic double with the 21-year-old forward winning the coveted Home-based Footballer of the Year prize at the 46th MTN SWAG Awards in Accra.

It was the ultimate recognition of the exploits of the promising player which put him in the spotlight, but he took up the challenge and never looked back.

The last 12 months have been very eventful in Barnieh’s career in domestic and international competitions as he has shown a lot of maturity and is beginning to make the headlines for all the right reasons. Hearts’ continental campaigns in the CAF Champions League and Confederation Cup were nightmarish but for the youngster, it was a learning experience for future exploits.

As league champions, Hearts could not bear the weight of expectation and their inconsistent performances cost them the title to rival Asante Kotoko, but Barnieh and his teammates ensured the Phobians did not go without a trophy as they battled to retain the MTN FA Cup with the young forward leaving his signature on the competition with a goal of supreme quality in the final against Bechem United at the Baba Yara Stadium in Kumasi two months ago.

Barnieh’s consistent performances last season have not escaped the attention of Black Stars coach Otto Addo who rewarded him with a call-up to the Black Stars last June for the 2023 Africa Cup of Nations qualifiers. The Hearts star was left out of Ghana’s 3-0 win over Madagascar in Cape Coast, as well as the squad that travelled to Angola to play the Central African Republic in a 1-1.

However, he was recalled into the team which travelled to Japan for four-nation Kirin Cup tournament and played alongside his Hearts teammate Dennis Korsah against Japan at the Kobe Misaki Stadium on June 10.

Working his way into the national team close to Ghana’s participation in the World Cup in Qatar was very strategic, but it was well earned by the player whose clout in Ghana football had grown after scoring eight goals in 22 league matches for the Phobians.

Barnieh’s goring influence was again to be seen last month as the home-based senior national team, Black Galaxies, thrashed the Squirrels of Benin to reach the final stage of the qualifiers for the 2023 African Nations Championship in Algeria.

Barnieh and his Hearts teammates Gladson Awako and Mohammed Alhassan gave Ghana a comfortable 3-0 lead in the first leg in Cape Coast, and in the return encounter in Cotonou, Coach Daniel Annor Walker’s new kid on the block scored again to give the Ghanaians a 1-0 win for a 4-0 aggregate victory.

His return to Ghana was not very rosy as he made stints with third tier sides Thunder Bolt and Madina Republicans in the same league in 2019. However, what was expected to be a dream move to Asante kotoko turned into disappointment as he was released for failing to impress during a four-week trial in Kumasi.

However, Kotoko’s loss was Hearts’ gain when the player tried his luck with the Phobians and became an instant hit. He was signed on a three-year deal ahead of the 2019–20 Ghana Premier League and made his Hearts debut on January 19, 2020 in a 2–1 away win against Liberty Professionals.